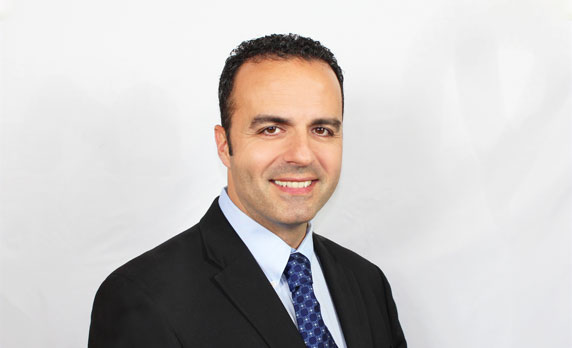 Practice Champions is a feature that debuted in November 2019 and appears in the AAAAI’s Practice Matters newsletter. This feature, which is a collaboration between the AAAAI Office of Practice Management and the Federation of Regional, State and Local Allergy, Asthma & Immunology Societies (RSLAAIS) Assembly, highlights community-based allergists who have made significant contributions to the A/I community. In other words, a Practice Champion is a community-based allergist who is actively working to make a difference in our specialty and improve the practice of A/I for our providers and our patients.

If you know a community-based allergist who should be highlighted as a Practice Champion, please email practicematters@aaaai.org or contact your local RSL Governor.

Raffi Tachdjian, MD, MPH, FAAAAI, is a community allergist in Santa Monica, California, where patients experience expert care in a pleasant office setting. His clinic is also the southern California/Los Angeles referral center for the Hereditary Angioedema Association (HAEA) and their patients. He enjoys caring for patients with other rare diseases as well. His path toward a career in allergy/immunology began through his participation in the AAAAI Chrysalis Project, which showed him the importance of mentorship. In fact, he runs his clinic as a mentorship program for pre-health professional school students, many of whom are his medical assistants. He is extremely proud of his staff and gives each the right to opt-out at any time from being treated like a third-year health professional school student. No one has done so to date, and in fact many have gone on to excellent training programs and residencies, and some are even colleagues. He pays all expenses for staff members to attend any allergy meeting that accepts their submitted abstract.

Dr. Tachdjian is also passionate about the role of music therapy as a complementary modality to enhance the lives of his own and many other patients. He has observed oxygen saturation rise by 5 to 9% without supplemental oxygen in chronic respiratory patients, and how painful procedures become more tolerable with music therapy. He recalls his frustration when as a pediatric resident, he was asked to care for a terminally ill 15-year-old cancer patient, who was a guitar virtuoso. The teen requested a guitar, and none could be found in the entire medical center. Mindful that music can lessen pain, fear and anxiety, as well as improve physiologic parameters in neonates, asthmatics, HAE and other patients, Dr. Tachdjian went on to create and lead the Children’s Music Fund. Now celebrating 20 years, this nonprofit provides music therapy by board-certified music therapists to children with chronic and life-altering diseases, and with the advent of telemedicine has a national outreach. As a clinician, mentor and advocate of music therapy, Dr. Raffi Tachdjian is truly a Practice Champion!

This is part of the MD Magazine® Peer Exchange, “Precision Medicine in the Treatment of Severe Asthma.”

Four patients with a dramatic, rare disease fight to live normal lives. Faced with a life-threatening condition, they join together to conquer adversity, finding strength in each other and their small but strong community.

Screenings are happening across the country: http://specialblood.com/screenings.html

Follow us on facebook to get updates and screening info: www.facebook.com/specialbloodmovie
For more information about Hereditary Angioedema, visit www.haea.org

Los Angeles has made great strides in cleaning the air, but poison still looms overhead, especially over the city’s clogged freeways. And kids are still getting sick. UCLA researchers are creating solutions and making science that can help us all breathe easier.

A view of the heart of Terminal Island in Long Beach, just south of the busy 405 Freeway. A mile away at Hudson Elementary School, one out of every five students has asthma.

He was riding in the car with his mother, April, who was taking the 11-year-old boy back from a visit to the ER for one of his chronic asthma attacks. He seemed to be getting better — and then his throat began to constrict. He began to wheeze loudly. He rolled his head back to get more air.

“That was wrong. ‘He should be better than this by now,’ I remember thinking. I knew something was wrong then,” April recalls. “They had given him some meds and the usual advice, but it was not working.”

She turned the car around and drove her son back to the hospital, where physicians and technicians eventually stabilized Peter and, again, sent him home. “On the way home I realized what the doctors were saying,” she remembers. “He had had a pneumothorax — a partially collapsed lung!”

We offer a variety of comprehensive testing for food allergens, venom, drugs allergies, and environmental testing.

We offer a variety of treatments from drug desensitization, immunoglobulin replacement, and allergen immunotherapy.

Trigger point injections combine techniques of acupuncture, local anesthesia, and your body’s natural pathways to boost your own immune system.